"All journeys have secret destinations of which the traveler is unaware." Martin Buber

I arrived in Lisbon mind-muddlingly tired five days after landing on the Iberian Peninsula. Barcelona had been a whirling mix of confusion, excitement, child-like joyfulness tempered with just a dash of self-consciousness.

My slack jawed response to seeing the facade of Gaudi’s Casa Batllo seemingly at arms reach as I emerged from the subway station on Passeig de Gracia was in stark contrast to that of the nonchalant Spanish commuters gliding past me. The days following were spent gorging on a smorgasbord of art, architecture and history that left my brain feeling like it had been put through a wringer. 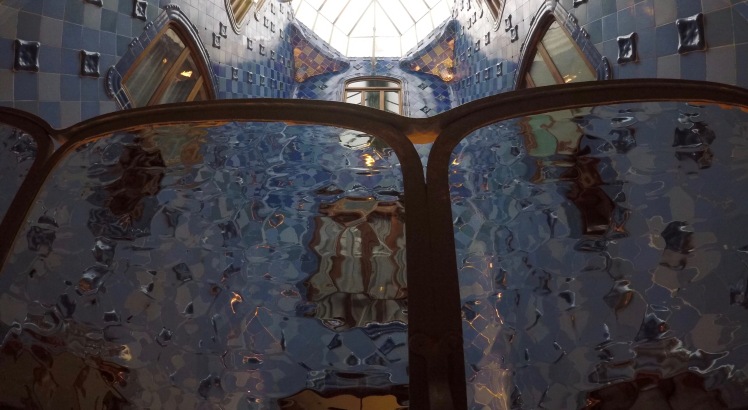 The nights on the other hand were a different story.

I had made a conscious decision when planning this month of travel to stretch myself in a few ways. Try not to spend money on crap that I don’t need; but feel comfortable spending it on ephemeral experiences that will leave lasting memories. Feel at easy with the unease of feeling lost; and feel confident in asking for help and directions. Rediscover a joy for living in a shared space; and learn to become comfortable with unfamiliar spaces and unfamiliar people.

The last of these was to be my first challenge. With no recent experience as a reference point, the hostel in Barcelona seemed ok. Not particularly welcoming, a little spartan, and spread over multiple levels which I assumed was the norm for such low cost accommodation. Walking into the room I felt like I had been transported back to Camp Kennedy Easter camp circa 1980, with all the joie de vivre of a feted teenage boys dorm writ large (or perhaps extra large if the box of condoms strewn across the floor was anything to go by!). My fellow journeymen were a Scotsman, a Frenchman, a Spaniard and two party-like-there’ll-be-no-tomorrow Italians.

I assumed that the nocturnal shenanigans of the Italian boys would simply become my new norm for hostel living. However a couple of afternoons later the well travelled Scotsman explained that their behaviour was completely unacceptable and should they come in late again making a racket he was going to make it clear that this was just not cricket. I’m paraphrasing of course, his expletive ladened diatribe was a little more fruity. He went on to give me clear instructions as to what I could tell the police when they arrived after he had finished with the Italians.

The sounds of the noisy, bacchanal infused return of the Italians followed by their snoring slumber, reminiscent of the sound of two locomotives passing each other at a station, occupied only part of my mind as I laid sleepily staring at the bunk above. As my roommates exchanged decibels I detected a painful unfamiliar growth in the area around my, how shall I put this delicately… gentleman’s department.

On investigating further in the morning, it appeared that I had not miraculously acquired a second scrotum as my sleep deprived state had led me to believe during the night, but that a small parasite had joined me for the ride. Being a bushman from way back (a-la Russell Coight) I know a tick when I saw one and this one appeared to be quite ensconced in its new home. Where the heck it had joined the trip I have no idea, but this was inconsequential compared with the task at hand. Delving into the jetlagged, sleep deprived recesses of my bald scone I came up with a couple of possible solutions. The first involved drowning the freeloader in metho, the other involved killing it with a hot needle. Both allowed for the tick to be safely removed intact thus avoiding any chance of infection or septicaemia both of which I was keen to avoid if at all possible.

As the day progressed the complexities of finding metho, and then wondering what to do with the remaining 99.5% of the purchase, melded into thoughts of how to heat up a safety pin in the privacy of a communal bathroom toilet cubicle without setting off a fire alarm or arising suspicions of illicit drug use. Both of these options seemed to become more outrageously complicated the more I mulled them over. Meanwhile the tick continued to enjoy the steady supply of protein oblivious to the grief it was causing me.

By the end of an itchy afternoon I had decided to bite the bullet and take the third path; a straightforward extraction. A trip to the Farmacia to acquire the necessities (tweezers and a tube of antiseptic cream) and it was off to a brightly lit toilet cubicle for the fun to begin. I was determined to do everything I could to ensure there was nothing left of the tick, so it was rather a messy business. Having removed the tick, cleaned up the bloody mess around me so as not to leave the cubicle looking like the scene of one of the Manson murders, I emerged from the bathroom a little bandy legged, feeling (probably hypochondriacal imaginings as a result of the clean up) as if my blood pressure had dropped a little, but knowing that I would only be eating for one from now on.

6 thoughts on “Week One | tired and ticked off”